Members of the community gathered in Cox Auditorium last Friday for Principia’s tenth Monitor Night Live [mp3 link], during which a panel of Christian Science Monitor correspondents from around the world shared their expert opinions on world news, politics, and entertainment.

Topics ranged from 3-D technology in the movie Avatar to the relationship between China and North Korea. Monitor editor John Yemma moderated the conversation and shared information about the Monitor’s status and goals.
Yemma and White House correspondent Linda Feldmann were the only Monitor representatives to appear in person onstage in Cox, while other panelists participated remotely via telephone and video links. Both spent the day on campus, attending a lunch with members of the Pilot staff, sitting in on classes, and dining with students and faculty in Hutchinson House. 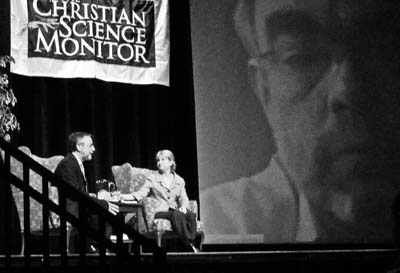 Yemma assembled a diverse panel of reporters based on their availability and interest in the event. Said Special Events Director Tim Booth, “He looked for kind of a spectrum.”

Peter Ford, a foreign correspondent based in Beijing, and entertainment writer Gloria Goodale of California had previously participated in Monitor Night Live events. Carol Huang, a writer and editor who lives in Dubai, was the third correspondent, appearing live via webcam along with Ford. Goodale was teleconferenced from Los Angeles without video feed.

Yemma assumed the role of editor in 2008 after working with the Boston Globe for 20 years. Before working for the Globe, Yemma spent nine years with the Monitor, three of which were spent in the Middle East. Feldmann has been with the Monitor for 28 years, and has covered the White House for the last seven.
After speaking with each correspondent individually, Yemma devoted a few minutes of the evening to talking about the Monitor as a publication. Ever since the decision to go web-first and move to a weekly rather than daily subscription, the Monitor has seen a 50% year-over-year increase in web traffic and a near-doubling of print subscribers.

Despite significant format changes, Yemma explained, the Monitor has and will continue to remain true to its reputation as an objective news source in a highly polarized world. As Feldmann said before the live evening event, there is “still a big market for people who want [news] straight down the middle.”

Yemma added during the talk that the Monitor staff does its best to report news with “no slant” and “no rant.” Monitor Night Live ran continuously from 1997 to 2005, after which, according to Booth, the Monitor’s subsequent restructuring most likely kept the staff too busy to continue the event.

Former College President Dr. George Moffett started Monitor Night Live in 1997. According to Booth, the event was meant to “build a bridge of familiarity” between the college and the newspaper.

Booth added that Moffett, who worked for the Monitor before coming to Principia, used to provide every student on campus with a print subscription to encourage more excitement about the news.

Said Booth, “Over the years, [Monitor Night Live events] grew and grew so that they were pretty popular with most students. Students tended to respond really well to them.” Booth said that current College President Dr. Jonathan Palmer and his wife Sue met with Monitor Assistant Editor Marshall Ingwerson over the summer, and brought up the possibility of a Monitor Night Live 2010.

Within a few months, Booth and the Principia community were working with the Monitor to bring about the event, which Booth said is “right up there with the [George E.] Andrews [Distinguished Lecture] Series” in terms of planning and significance for Principia.

Said Booth, “Normally if we have a year to work on it, we can develop the promotions a little more deeply, particularly off campus.”

Continued interaction with the Monitor is important, as students often feel sequestered from the world within the so-called “Prin Bubble.”

Sophomore Kelly McGinnis said she doesn’t always know details of the news. She added that it might be worthwhile to continue Monitor Night Live so that “people will start getting more interested.”

Sophomore Brandon McKee said he thought the event would be “geared more toward global politics,” but added that he appreciated hearing from news experts.

As Feldmann said after the Pilot lunch, most college students are “very wrapped up in classes and [having] a social life,” and therefore do not always make time for catching up on the news.

Booth said, “In a sense, students are exposed to the world through their classes, and that’s their main priority while they’re here. My sense of it is that most of us aren’t [very] tuned in to current events on a daily basis.”

While Principia can benefit from a relationship with the Monitor, the publication may need the Principia community’s support just as much. Booth pointed out that Principia is “arguably one of their largest subscriber bases.” The Monitor also continues to hire Principia students as interns and employees. In fact, several current staff members are alumni.

In the hopes of continuing this symbiotic relationship, Yemma said, “My goal is to have this be an annual thing.”