Sustainable living is becoming a well-known issue in the world. Principia is engaged in the environmental discussion, too; we have a fairly eco-friendly waste system, including industrial composting as well as single-stream recycling.

But sustainability is about more than trash: it also includes thinking about how everyday living affects the environment. Food is one of the biggest parts of our lives, and requires an immense amount of energy to go from farm to plate. Fertilizer, fuel, pesticides, and refrigeration are all part of that process, and they are especially energy-expensive.

That’s why it’s exciting that juniors Conrad Bollinger and Ryan Richardson and senior Nadine Tidwell are figuring out a way to grow some of the food we need here on Principia campus—using  aquaponic systems. By spring 2016, they hope to produce all the lettuce that Dining Services needs.

So what exactly is aquaponics? According to Tidwell, it’s “a closed system that involves fish and plants. It’s a combination of hydroponics (growing plants in water [instead of] soil) and aquaculture (the farming of fish).” In other words, aquaponics is an enclosed system that pumps nutrients from fish waste into a bed of plants growing in water, and then cycles the water back to the fish tank.

Tidwell said that once the system begins, very little needs to be added to keep it going: only “fish food and a bit of water every now and again to…[counteract] evaporation.” This is because “the fish waste gives nutrients to the [plants] so you don’t have to add fertilizer.”

Principia’s aquaponics system is currently housed in the Science Center’s greenhouse. It’s made out of two, four-foot IBC totes (big plastic containers) which house fish, a nitrification filter, and two plant beds. The two beds are different types: one is a raft bed (a piece of foam with holes cut out), and the other is a media bed (Meramec pea gravel that water flows through). Bollinger said that the raft bed works well and produces a lot of lettuce, but added, “The media bed has just been terrible. We cannot get anything to grow in it… [except] one kale plant…and one butterhead lettuce, which is kind of disappointing.”

Tidwell and Richardson became interested in aquaponics when they visited the University of Wisconsin. There, a leading aquaponics company called Nelson and Pade put on a teaching session which got them excited to set up their own system at Principia. They recruited Bollinger once they got back, and the three have been working on the aquaponics since the spring semester of 2014.

Currently, the aquaponics system is functioning very well, but the group went through a long trial-and-error process to get there. At first, they had to deal with a mass of paperwork. Bollinger said, “I remember thinking, ‘Oh, this is going to be sweet, we’re just going to grab a couple hundred bucks from the biology department…[and] get going, get growing, get experimenting…’ But there were so many steps we had to go through before we could just run with our plans.”

Once they got their project approved, they had to start the real process of running aquaponics. At first, they had a hard time making plants grow. Since leafy plants grow well in aquaponic systems, they decided to grow romaine lettuce. But Bollinger said, “Our first crop…had a two percent germination rate, which is terrible. If we planted 50 seeds, only one would start growing.”

But by adjusting the amount of nutrients in the system, they were able to get to a 95 percent germination rate. Now, according to Bollinger, the group is fine-tuning and “trying to figure out methods that can accelerate the growth of the plants [by] using heat lamps, and strategically positioning [plants] by the flow of nutrients that’s deposited through the PVC pipes running through the system.”

The group has some ambitious long-term goals. Beyond providing just lettuce to Dining Services, they’d like to be able to grow enough tilapia fish to supply the dining room, and maybe even branch out into other produce like tomatoes. They’d even like to get a dedicated greenhouse built, so they could expand even more.

Bollinger isn’t convinced it will happen. He said, “[Setting up aquaponics] takes a lot more time than I ever thought it would, and so at this point I’m thinking that we really just solidify [what we have].” But he added, “Who knows… Ryan is a dreamer. Maybe one day his dream will come true and we’ll have a full aquaponics in its own greenhouse.” 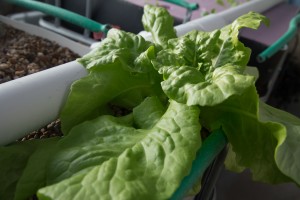 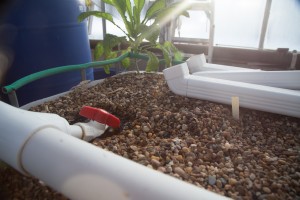