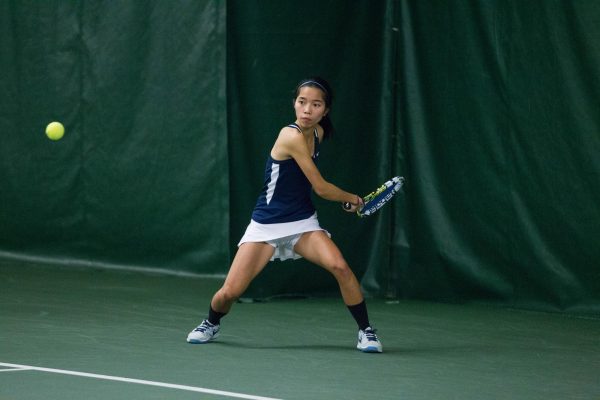 The women’s team traveled to Kalamazoo Michigan on Friday , March 4, to prepare for a tri-match against Calvin College and Kalamazoo College from the Michigan Intercollegiate Athletic Association.  The matches provided opportunity for the players to compete against higher level players, gain experience and learn to maintain their effort against tough competition.

In the first match against Calvin College, Paige Cooley won her singles match. After trailing 3-1 in the first set, she ran off 11 straight games to close out the match 6-3, 6-0.  That was the only win for the Panthers in the two matches.  In the second match, Paige lost the 3rd set super tie-breaker 10-4.  She battled back from a first set loss to take the second set 6-1.

Anh Vu had two great singles matches even though the scores don’t seem to reflect the effort and diversity Anh displayed.  In her first match, she played a steady game of slices, chips and moon balls with most of the rallies extending beyond twelve exchanges.  She lost the first set in a tie-breaker.    In her second match against a strong player with great accuracy, Anh played an aggressive hard hitting groundstroke game.  There were many exciting points.  Anh said, “she really enjoyed the match and the style of play”.

Freshman, Zoe Boyman played great tennis in the second match against Kalamazoo.  She was commanding in the doubles making great returns and passing shots as well as being aggressive at the net.  In her single match, she played a steady baseline game and hit her serve with great accuracy.

Hallie Jones, played #4 doubles in both matches, improving her volley anticipation and aggressiveness at net.  This strength continued in her singles where she often came to the net to close out points.  She was steady with her groundstrokes in both matches and found the right moments to pound her strong forehand.

Caitlin Carney, Brittany Duke, Nathalie DeLoach and Gracie Buchanan also played with great heart and effort. Brittany fared well in her singles match with a close 6-4 first set, where she hit solid groundstrokes to push her opponent around the court.

The complete scores for both matches are below.
The next match is on spring break in California where they will take on Vassar, Chapman, Cal Tech and Redlands.