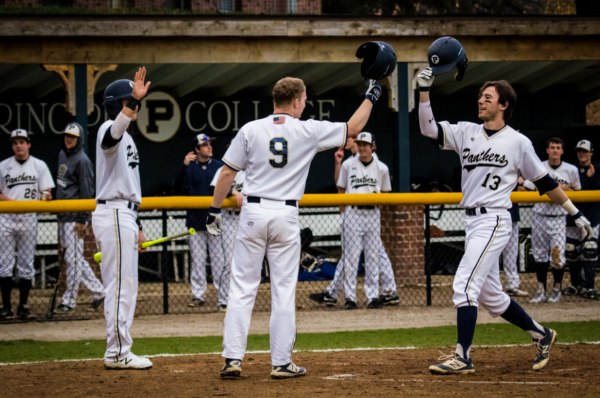 After a pipe burst on the Principia College baseball field, the Panthers’ home opener against the MacMurray Highlanders was relocated Gordon Moore Park in Alton, Illinois. Although the Panther’s competed on unfamiliar terrain, they were unfazed. Principia played well against one of the top teams in the league and came away victorious in their conference opener.

The Highlanders were one of the best pitching and defensive teams in the league last year and entered this matchup with the best record in the conference at 5-1. The Panthers showed tremendous offensive skill as they tallied six runs against arguably the deepest pitching staff in the SLIAC.

The win boosted the Panthers to 1-1 on the year and 1-0 in conference action, while the Highlanders dropped to 5-2 and 0-1 in SLIAC play. The Panthers eventually won three and dropped one against Crowley’s Ridge College during their official home-field opener.

“I am proud of the way the guys battled adversity today to pick up the win against a very talented team,” says Head Coach Chris Marston. “It could have been easy to complain about the weather and the field change, but instead they rose to meet the challenge.”

Sophomore Zach Grennie says, “I think at this point, we’ve knocked down one of the top teams in the conference . . . . I think as a team that shows that we can compete with the best.

Parker Tibbetts, a senior on the team, is looking forward to his last season of baseball. He says, “We’ve got a lot of great freshman coming in this year. We’ve already won our first conference game against Macmurray who we’ve struggled against in the past.”

Tibbets says, “Our offense is looking better than it ever has. I think we’ve got a really good chance to compete this season and I’m looking forward to continuing to play strong.”

Keep your eyes peeled, the next conference game isn’t until after the Panthers travel to Auburndale, Florida to play a slew of spring break matchups.