Late in 2009, the administration published its Strategic Plan for the next few years. The Principia website explained that opportunities for Principia’s growth include: “worldwide growth in the Christian Science movement, established and emerging technologies, an increased desire for Principia to meet the educational needs of an ever-more-diverse pool of potential students, and progressive ideas in education. To address these opportunities, Principia has launched a 10-year strategic plan.”

The Strategic Plan, which aims to guide Principia into the 21st century, recognizes the value and importance of the residential college educational experience. Consequently, the administration has thought of new ways to make the Elsah campus even better. The outcome of this process is the Master Plan, a sum of information, ideas and visions to transform the Principia campus and to adjust Principia’s facilities and buildings to meet its current and future needs. While the Master Plan is still under development, Chief Administrative Officer, Peter Stevens, and two main architects involved in the planning, John Guenther and Fred Powers, gave insight into their vision and thoughts for the campus.

One of Stevens’ biggest goals was to cooperate with students, faculty and staff. The Master Plan aims to meet a variety of needs so that everybody on campus profits from the changes. He said: “We have reached out to students in different ways such as surveys and meetings. I can see how their feedback directly goes into the work that [the architects] are doing. I would hope [the students] know it matters what they say. […] I would want them to know that they are being listened to and that it matters.”

Guenther added, “It is a very participatory process […]. It springs forth from the campus {community…]. That’s just what makes it a wonderful thing. The ideas are reflected in the plans that come forth from all input that we have received.” His colleague, Powers, agreed: “[The] students should know that the people that we have worked with, the faculty, staff, and administration really have their interest first and foremost. I hope that everyone knows that.” 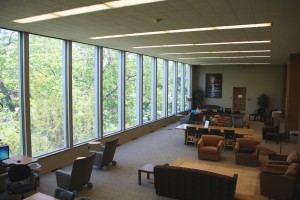 A main aspect of the Master Plan is the reconsideration of the function of the campus’ main buildings: the School of Government, School of Nations, and the Marshall Brooks Library. Stevens said: “Think about the Maybeck dorms. They speak to you, they have a feeling … [that] the School of Government classrooms don’t. They are just there. They are useful and serviceable, but they don’t induce a sense of community.” Comparing the architects of the newer buildings with Bernard Maybeck, Stevens added:  “[These architects] took a different approach, and they made the best decision that they could under the circumstances and the information that they knew, but it was a different philosophy.”

Guenther explained this even further: “[Maybeck] had planned […] the center of campus, and for the most part those plans were unrealized, [for example,] The Great Hall [and] the library that he had envisioned.  And this was arranged as if it was the center of [an] English village. [The School of Government, School of Nations, and the Library] were erected in the general location of the center of the campus that Maybeck had envisioned, but in an entirely different architectural feel and scale. […] We are trying to understand the original intention, think about today’s needs, and marry those into a response that carries on the tradition that Maybeck established with the Master Plan that he worked on […].”

In the early 1930s, Bernard Maybeck started to design Principia College’s campus in Elsah, Illinois. The design was meant to reflect Principia’s unique location, its purpose, and its spirituality. Maybeck had a unique vision for the campus buildings: “The buildings will appear to have grown into position so that, in the years to come, buildings on campus will become one harmonious, organic unit.” Unfortunately, not all of Maybeck’s visions were realized, and today we see only parts of his Master Plan for this campus. Both Guenther and Powers have studied Maybeck’s plans and designs, and want to carry his tradition forth into the new design of the campus. Guenther said, “We are seeking to extend that [architectural] dialogue [and] that tradition into the future. [It’s a] dialogue between today and what he left us as a legacy.” 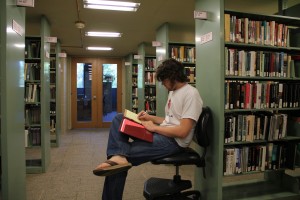 The idea that has challenged the planners most is that of a building to replace the library. The result is the so-called Core Academic Building, which will also focus on 21st century technology and rethink the concept of library and learning techniques. College President Dr. Jonathan Palmer sees that need, and stated: “Early in my time here, we crossed over [the line] where we now spend more money on electronic resources than we spend on paper resources. And I think that gap is only starting to widen.”

The building will be more than just a library complex like the one the campus knows today. According to Guenther, the building will also enrich students’ learning experiences by providing effective architecture that supports individual as well as group needs: “When you [as a student] go to the Core Academic Building, you may want to study in a very private [and] quiet place, a room where you can close the door and just focus. You may want to study in a group and rehearse a presentation for next day’s class. You may want to be in the middle of a larger environment, such as the Learning Commons, and some people may learn better in such a setting. The idea is to provide choices for use.” Replacing the library and possibly the School of Nations and School of Government with the so-called Core Academic Building, which will reflect inspirations and ideas form Maybeck’s times and will also focus on students’ lifestyles, learning processes and inspirations, is a key part of the Master Plan, but certainly not the limit.

Stevens also uses his work on the Master Plan to rethink architectural and general structural needs on campus. He wants to rethink the outdoor spaces on campus and the connections between buildings: “Think about driving on the campus right now, and you have your choice. You can either drive around some road that eventually takes you to the School of Government, and there is a flagpole and a brick building. Or you can go behind the Science Center and Howard [Center]. But the outdoor space […] doesn’t speak. There is no message, there is no […] sense of arrival. […] As we have looked at the Master Plan, we have really thought about that sense of arrival. [And that] is not inconsequential. I mean it’s really quite important, because when you first connect with this space that really develops an impression on you and speaks to you […]. In the original Master Plan […] that Maybeck did, it was very clear that there would be certain things that you would connect with as a community member […]. The Master Plan tells us not only how we are going to meet needs in the future, but also how are we going to define that outdoor classroom, that outdoor space.”

The Master Plan also includes a careful approach on how to make these big changes in the future. Stevens worked for a long time on the task of finding a way to start reconstructing parts of campus while college activities still occur. “We have to figure out a sane way to change the wheels while the car is moving, and that takes a lot of careful thought to put something like that together. We have gotten far enough to develop a concept that resonates with many people, including the trustees. They’ve given us a little bit more running room to refine that concept so that we can bring those ideas, those visions into sharper view.”

The Master Plan is a very large project and consequently raises a very distinct need for spiritual and prayerful support. Dr. Palmer likes to look at the Bible story of Nehemiah, who received direction from God to rebuild Jerusalem’s wall. Dr. Palmer explained the importance of Nehemiah’s story for the process at Principia: “Nehemiah used one hand for doing the work, and the other for wielding a weapon— and that continues to protect Principia. And that building and that process is one that cannot be distracted.”