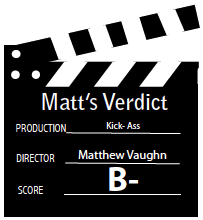 Oh, how I wish this film had been called Hit Girl so I could have given it an A+. Unfortunately, the plot of Kick-Ass barely holds together the fantastic scenes of choreographed vigilante action. Scattershot plot aside, Kick-Ass has plenty to offer in almost every cinematic department.

Let’s get the bad out of the way, so I can tell you what was good. The plot revolves around Dave Lizewski (Aaron Johnson), a high school nerd who decides to become a superhero. He doesn’t have superpowers, but he can kick your ass. In the first real fight scene of the movie, Kick-Ass rescues a man from being beaten to death by gang members, and ends up inspiring more costumed vigilantes. This also happens to be the last time Kick-Ass fights for another hour of the film.

Instead, the plot is quickly hijacked by Big Daddy (Nicolas Cage) and Hit Girl (Chloe Moretz). This father-daughter team of costumed killers wages a personal war against the mafia. The relationship between this father and his 11-year-old daughter is both sweet and disturbing at the same time. Once Kick-Ass crosses paths with these professionals, he is quickly dragged into the mob war. At this point the plot creeps to a crawl, introducing another superhero, Red Mist (Christopher Mintz-Plasse) in order to add unnecessary intrigue.

Fortunately, the climax almost makes up for the previous hour of bum-numbing shenanigans. Including high stakes, overwhelming odds, and fresh action gimmicks, this sequence is guaranteed to elicit whoops of joy from the audience.

Hit Girl steals the show. I suspected that I might have problems with a foul-mouthed 11-year-old girl killing a bunch of mobsters … oh, who am I kidding? That sounds fantastic! Roger Ebert found Hit Girl grounds for giving the film a one-star rating, but I found her character delightful. There’s nothing more empowering than a female character rejecting the stereotypical victim role and kicking ass.

The cinematography in the movie is surprisingly good for the low budget of the film. Most scenes were shot in a way that will remind viewers of other superhero movies. Familiar shots include running along rooftops, jumping from building to building, and fighting off groups of bad guys.  Each of these sequences looks as well put together as the movies from which they are inspired.

Kick-Ass also experiments with new cinematic ideas during the fight sequences. In the first fight scene, the editing cuts between live footage and cell-phone camera footage that is being taken by onlookers. This footage is what makes Kick-Ass an internet sensation, and sparks the creation of other superhero wannabes.

The film’s fantastic soundtrack complements its strong visuals. The frenetic energy of the fights are complemented by pulsating electronica tunes from artists like Prodigy. The combat sequence where Hit Girl slaughters a room full of grown men is complemented by freakishly playful music like “Bad Reputation.” The soundtrack is triumphantly in tune with the feel of the movie.

A superhero film is generally limited in the themes that it raises, but Kick-Ass does a good job bringing new questions to the forefront. The morally dubious actions of the protagonists of the film are overshadowed by a greater and more urgent morality. Vigilante justice might make many uneasy, but as Kick-Ass puts it: “With no power comes no responsibility; but that’s not true.”

When Kick-Ass rescues a victim from a group of gang members, they ask; “The **** is wrong with you, man? You rather die for some piece of **** that you don’t even ****ing know?” To which he valiantly replies: “Three assholes, laying it in one guy while everyone else watches? And you wanna know what’s wrong with me? Yeah, I’d rather die … so bring it on!” This sums up the quixotic morality of the movie.

Kick-Ass is a very culturally hip film. It incorporates the YouTube phenomenon, nerdy high school kids, and a libertarian brand of justice. Its plot barely holds together, but if you want to see some of the best choreographed action in theaters, you can’t miss this film. It’s regrettable that Kick-Ass is overshadowed by Hit Girl, but you won’t really complain.