How to accommodate all players while also having fun 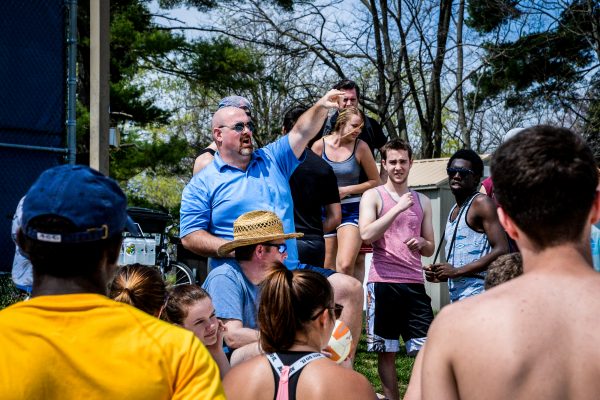 Intramurals have been a long-standing tradition at Principia. Intramurals are both a fun way to show house spirit and a good outlet to compete on teams, make new friends, and play sports.
Why are intramurals important at Principia? Ferg House RCE Dan Schneider says, “They provide athletic opportunities for non-varsity and out of season varsity athletes. And a fun, energetic activity on a Sunday afternoon. Also, I think they build on what little is left of house unity, especially for the men’s houses.”
Sophomore Sophia Hathaway adds, “I think intramurals are important because they connect the houses and create a sense of competition and fun!” Intramurals seem to be a great way to include everyone in the house on working towards one common goal – winning the intramurals tournaments.
However, this creates a sense of pride and competition when it comes to winning these tournaments. Some players on the team play just to have fun while others are there to win. The question arises: should intramurals be more or less competitive?
“Well, that is big question,” says Schneider. “Some say that less competitiveness would draw out more people, but others say that competitiveness is what makes it fun. Many have tried to think of ways to infuse both into the system, but on the whole it depends on the sport and house. Currently the system [of] having pro and fun teams tries to address that issue.”
“I think that they should be whatever people want them to be,” says Hathaway. “I think that as long as they remain fun and the spirit of intramurals is intact, then they should be competitive. I also recognize that not everyone wants that sort of competition and so I think year by year it depends on what each house and it’s members want.”
Often, the issue arises that an intramural team can be made up of players who are there to win and players who may not be the best at the sport but still want to contribute to their house. Unfortunately, though, not enough people show up consistently to have completely separate tournaments for fun and serious competition. In addition, the competition levels change from year to year.
How can intramurals change at Principia? Schneider says, “Well, everyone keeps trying to figure out ways to get more people to show up. I would like that, too, but bottom line is there is a segment of the population who is excited for intramurals and will come out to play, and no matter what sport you do, a chunk of the student body isn’t going to come.
“If you change too much to accommodate those people you might end up ruining it for everyone else. I have not been able to see a better method so far. Intramurals is [great] for those who show up, so show up and have some fun!”
Hathaway says, “I think with new senate reps each year, intramurals are always changing. Different sports are demanded and the number of participants always changes. I think that one thing that is being developed is the idea of whether intramurals falls under Student Life or Athletics because it has a culmination of both! Depending on the vision of the senate rep and the intramural heads, new ideas are always being developed. Like this year, we decided to add dodgeball in the fall semester.”
Overall, intramurals are an awesome way to get houses involved in friendly competition and an activity that make Sunday afternoons exciting and active.