Dances at Principia can be affected by both people and place

Principia is no stranger to dances. In fact, the institution has already hosted Brooks Beach Bash, Rackham Rave, the Lowrey Toga Party, and the annual Homecoming dance this semester. The weather, music, food, and spacing are all different, which is enough to entice even seniors who have ‘seen it all’ to stop by.

Each event has an atmosphere so divorced from the others that it is easy to distinguish between them all. But the one constant among every event is that people are there to dance. Regardless of skill or technique, the desire to move and groove unifies the student body. Yet for students who are new to Principia College dances, one notable aspect is missing: grinding.

High school dances like Prom, Homecoming, Sadie Hawkins or Morp (Prom spelled backwards) all possess an energetic environment that creates lasting memories, which many colleges struggle to replicate. Though grinding is rarely ever seen at Principia (College and Upper School), public high schools around the country have needed to take action in order to discourage sexualized dancing. 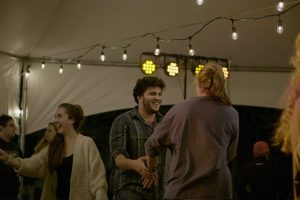 bility. Skaneateles High School in New York attempted to structure dances, teaching students to do the cha-cha, swing, and the waltz.

Even a simple Google search shows numerous articles noting high schools that have cancelled their dances due to excessive grinding. Some believe depriving students of the opportunity to freely express themselves at a dance seems unfair, but parents and administrators are adamant about limiting dancing freedom.

However, at Principia grinding is unpopular and almost never seen. Senior Katie Swats believes one reason that Prin dances differ from her public school’s is because she knows a greater percentage of the student body. “I didn’t know anybody in high school, so it was weird for me to be there,” Swarts said. “The friends I have here, I feel free to dance and be silly with.”

Swarts also noted that her public school was comprised of 2,500 students. It’s a lot easier to be a nameless face in the crowd at a highly populated school than it is at Prin. When students are dancing on campus, it is probable that everyone around them knows their name, what house they’re in, what sport they play, who they’re dating, etc.

The code of conduct also plays a role. With grinding being so closely associated with sex and sensuality, students feel it isn’t worth the risk. Some students have even taken it upon themselves to see that nothing but appropriate moves hit the dance floor. At Rackham Rave, students policed their peers to ensure no one overstepped boundaries.

Though Principia dances are definitely less sexualized than those of public colleges and high schools, many people like them more! “Dances here are way more fun than high school,” Swarts said.