The meeting signaled the definitive end of the college’s football program. It confirmed Palmer and Ellis’ Dec. 1 decision after a month and a half of campaigning by Meyer, a former Principia football player, to bring the program back.

Palmer and Ellis fielded questions about the decision from students, alumni, staff, and administrators for nearly two hours in Wanamaker Hall. Palmer said that his goal was to clear up any “misunderstandings” about the meeting’s purpose – namely, to explain the reasons behind the program’s discontinuation and not to open any possibility of reviving Principia football. 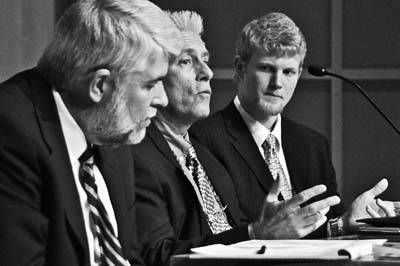 Palmer said, “I do not anticipate any time in the several coming academic years looking at this issue again.”

Two key elements dominated the conversation, especially concerning a possible reinstatement: first, the number of players, and second, the position of head coach.

Meyer announced that he had spoken with Brad Warrick, the head football coach at the Upper School. Meyer recommended that Warrick be interviewed for the head coaching position.

Palmer and Ellis reported that a search committee had been formed in December 2008 and a national application for the position issued, but that the several-person committee “made the choice not to move forward on any application.”

Regarding the number of players, Meyer compiled a list over winter break of 73 students interested in playing football for Principia. Of the 73, 42 will be here next year regardless of the status of the football program, three are waiting to be admitted, and 18 are generally interested. Meyer said that 55 students are committed to playing for the team if it is reinstated.

Over break and in the first few weeks of this quarter, Meyer undertook a campaign to drum up support for the football program. He established a Facebook group, “Principia College Football 2010,” which at publication time had 505 members. In addition, Meyer advertised the issue via print fliers and on his weekly political show on Principia Internet Radio.

Many alumni and current students sent Palmer emails, a number of which Palmer described as “inspiring” emails about individual growth through the football program. Some of them are continuing the campaign for a Principia football program in spite of the decision.

Outside of the Principia community, a grassroots group known as the Gridiron Club has sprung up at www.principia-college-football.org, spearheaded by college football alumni from the 1950s, 1960s, and 1990s.

The group, unaffiliated with The Principia, includes as part of its mission statement to “provide incremental financial support when needed” in “strict compliance with NCAA rules and regulations,” and to “sustain and elevate the camaraderie” of football alumni and supporters through “periodic gatherings and fundraising events.”

Palmer described his experience with the football program since taking office in July of 2008 as one of ongoing conversations.

In December, he and Ellis convened a commission to assess the program and its history. January 2009 brought the official suspension of the program, according to Palmer, “to give us an opportunity to see if we could recalibrate.”

Over the next eleven months, Palmer had a series of meetings with alumni, head coach candidates, and potential players. The April update provided no definitive head coach candidate, and discussion in August outlined the two key elements of coach and player count.

Throughout fall quarter 2009, Palmer said he ran into “the same set of issues,” and in November, Meyer approached Palmer with the idea of writing an article about the football program’s future. At that time, Palmer reported there were around 25 potential players on campus.

The Trustees met with Palmer after fall quarter, after which point Palmer said he officially “proposed to the Trustees that we discontinue the football program.” The Trustees approved the proposal, and in early December an email notification was sent to the Principia community.

At the recent Wanamaker meeting, a host of questions were raised, some combative and some emotional.