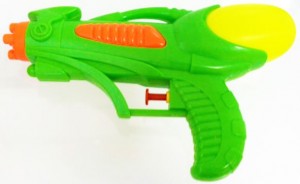 Much of the campus community has been on guard the past couple of weeks. Students, faculty and staff have been scheming and hiding from one another in playing the highly competitive game of Eliminator.

The mastermind of it all, sophomore Charlie Petch, divvied out targets and set the rules. Players were each given a target to shoot with a water gun without anyone seeing the attack. Since dorm rooms were off limits, players were forced to carefully plan their attacks in public.

This was restricted even more by the rule of being “stunned.” If a player noticed their attacker was in the room, they could shoot them and stun them for an hour, disabling them from being shot as well as giving them a peace of mind to enjoy their social life.

“I’ve received up to 20 emails a day regarding Eliminator,” Petch said. He found that as the game got closer to being over, more emails flooded in to clarify rules. Players of the game appreciated specific rules, because without them they felt vulnerable and unsafe.

Freshman Nathalie DeLoach said, “One of the guys waited under my car during tennis practice for an hour to get me. Sometimes they hid in the Rackham entrance in the rafters. Or they hid in our closet. So basically, I just don’t go back to Rackham. It’s super stressful.”

Many Eliminator participants agreed that it takes over your life, especially the first week. Freshman Olivia Adams said, “The first week I barely did any homework because I was just stressing about it constantly and scheming about what I needed to be doing. But then I figured it out and how to plan my lifestyle.”

Aside from the game taking over participants’ lives, many agreed that they loved getting to meet new people. Dean of Students Debra Jones participated in Eliminator. She was happy she played because she got to talk with students and get to know them better. “In playing Eliminator, even though I only lasted 22 hours, I connected with a lot of students about the game and learning the rules and having interactions that I might not have had in other settings. I really liked it.” Jones thought highly of Petch’s idea to put two interesting facts about themselves on the cards each person had. Jones thought it brought a sense of community to the game.

While Jones was pleased with the sense of community, freshman Shane Reisen focused on everything but community.  Reisen is what you might call “hardcore” well, when it comes to Eliminator. He was willing to go to any extent to win this game. Reisen said, “There are no morals in Eliminator. There are no rules. It’s whatever it takes to win, honestly.”

When Reisen was asked what the farthest extent he went to eliminate someone he said, “Well, I was on top of the library roof waiting, but someone called campus security on me so I had to skedaddle.” We’re all wondering, how did he get on the roof? Risen said, “There are ways.”

Now, looking at the game of Eliminator from an outside perspective, many students think it is too much. Senior Carlie Sanderude said, “I don’t mind the game at all, but being paranoid 24/7 isn’t for me.”

Rackham resident counselor Geoff Hinchman has witnessed many Eliminator games throughout his time at Principia. He said, “I think there are pros and cons to Eliminator either way. I’m sure there are some people who don’t do well with it, but I’m sure some people handle it just fine.” Hinchman said his favorite part about Eliminator is hearing all the stories that come of it.

So the big question is, who won? The winner of Eliminator 2014 is junior Eifel Kreutz. This was Kreutz’s first year playing and his under-the-radar strategy paid off. “I’m glad I won; I was in it to win it,” he said. Kreutz is glad it is over, but he had a lot of fun.

Now that Principians are at ease and the scheming and hiding has come to an end, all we can ask ourselves is: who will be the champion of the next Eliminator?