The Metaphysics of Physics Institute has provided students with cutting edge, scientific experiences

With the mission to show the undeniable link between natural science and metaphysics, Laurance Doyle’s Institute for the Metaphysics of Physics has empowered students with opportunities and ambitious plans for groundbreaking experiments in the future. Doyle stresses that the purpose of the institute is to help students bridge the gap between physics and metaphysics.

Laurance Doyle’s Principia career began when he was invited to fill a Physics professorship. Doyle, along with Scott Schneberger, the Dean of Faculty, then created the Institute for the Metaphysics of Physics.

The name reflects the institute’s mission to highlight similarities between physics and metaphysics. “Everyone at Principia is a metaphysician so I knew ‘metaphysics’ had to be a part of the name,” Doyle said.

As physicists start to reach metaphysical conclusions regarding reality, the distance between physics and metaphysics is lessened. Physics has discovered matter to be insubstantial and experiments to be intimately connected with consciousness. An example of this is the Copenhagen Interpretation, which says that an electron cannot exist without it first being observed. Metaphysics agrees with the importance of consciousness and takes this one step further by denying the reality of matter. Doyle said that the main difference between the two is how much of the existence of matter they each admit. The similarity between them is that consciousness plays a role in every experiment at a fundamental level.

Another unique characteristic of the Institute for the Metaphysics of Physics is its budget. So far, it has been self-supported, meaning it has run on donations outside of direct Principia funding.

The Institute has started building their own quantum optics lab for physics experiments. One such experiment is the Experiment in Nonlocality where students will demonstrate faster-than-light connectedness called entanglement. Another experiment, called the Double-Slit Experiment, will be the basis of the quantum astronomy studies. This experiment starts by shining light through two holes, which creates an interference pattern and shows that light, as waves, run into each other. If the experimenter knows which path the light goes through, the light won’t go through both holes.

Unique to this experiment is using the Uncertainty Principle to manipulate which path the light takes. With this modification, the interference pattern returns. One of the purposes of this experiment is to show that the transfer of data and instantaneous teleportation applies over galactic distances. This concept, called entanglement, was proposed by Einstein and confirmed by physicist John Stewart Bell.

The Institute for the Metaphysics of Physics reaches beyond the Principia campus. Over the summer, five students interned at SETI Institute in California. SETI is a non-profit, scientific research organization. While there, students had access to the Allen Telescope Array (which is an array of forty-two radio telescope dishes) for recording data.

Doyle has ambitious plans for the future of the Institute for the Metaphysics of Physics. Summer 2017 promises participation in groundbreaking research for Principia science students.The students will participate in the very first experiments in quantum astronomy – a new topic that Doyle hopes will become a large field of study in the coming decades.

In June and July of 2017, students will prepare at SETI for future experiments. They will “moon bouncing”: a process in which they perform a double-slit experiment using different parts of the moon. The data from this study will later be transferred to the main experiment which uses Jupiter’s moons. Doyle expects several student capstones to result from this on topics such as the components of the experiment, the radar used, and how to calculate the data from the moons of Jupiter.

From this understanding, Doyle and the students plan to conduct two experiments. The first experiment is motivated by the conflict between general relativity and quantum physics. The time measured in each of these two theories seems to be inconsistent which leads scientists to question if two types of time exist. Using the double-slit experiment and Jupiter’s moons as the holes in the experiment, the institute hopes to find the answer to this question next year.

The second experiment extends the double-slit experiment. They will try to change the path light took 1,700 light years away. They predict that this may change what happened 1,700 years ago based on the solar system’s light path. This will be done using similar experiments with particles of pulsar.

Progress on campus includes the future creation of a core course called, “The Metaphysics of Physics,” a course that Dr. Palmer and Dr. Ritter asked Doyle to put together in collaboration with the physics and chemistry professors. When asked about the course, Doyle shared the SETI motto of, “stay tuned.”

Doyle’s love for physics, Principia students, and breaking barriers is clear. “Harvard is known for law and Juilliard for music. Principia is best at bringing a spiritual view to education,” he said. 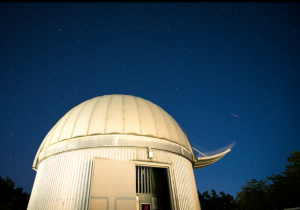