(Check out the latest interview of your fellow, on-campus artists!)

Joey White is a junior majoring in Outdoor Education and Fine Arts. The Pilot interviewed him, and he shared his thoughts about developing as an artist.  Excerpts follow.

AS: When did you first become interested in art?

JW: I’ve been interested in art my whole life. My dad was a carpenter and he liked drawing out stuff before he did it – more the engineering side of drawing. My mom was an art major here, and people paid her to do portraits of themselves or their kids. I’ve been surrounded by art as long as I can remember.

AS: What are all of the different types of art you do?

JW: Anywhere from building, engineering, and welding, to drawing with pen or pencil. I’m God-awful at watercolor. I’m taking a class and getting better, but I like tinkering with stuff a lot. I’m trying to start a silversmithing business, and I don’t have the equipment or the funds yet, but the idea is there, so it’s a work in progress.

JW: When other people ask me how I “get good at art,” I say, “just practice.” For a lot of the time, it’s true, but there are also times when I don’t draw for months. I just forget about it, and then I get back into it and I draw a lot and then eventually it falls away for a little bit again. There’s always something there. I’m always hands-on with everything I do, because if not, life gets frustrating.

AS: Do you have any current inspirations right now?

JW: I don’t know. I guess there are a couple of cartoon TV shows I’ve watched recently that are super creative and hilarious. I’ve been watching Rick and Morty, which is a spinoff of Doctor Who and Back to the Future. It’s kind of inappropriate, but there are lots of really funny aliens and stuff in it. It’s like, “Where did that come from? I’ve never seen anything like that before.” And I try to recreate similar stuff in comics, whether it’s based off a real animal, or just something weird with eyes – fictional characters that don’t make any sense.

AS: How do you come up with that?

JW: I don’t exactly know. Sometimes I’ll be walking around and a very general shape will inspire something. I don’t know how exactly the process works, I just kind of do it. Sometimes I’ll think of an animal and then blow some part of it out of proportion, like make a giraffe with really short legs or put a giant machine gun on the back of a tiny dinosaur. It’s really cool seeing contrasts in things and how they complement each other. For example, I take something tame, like a little pig or a little monkey, and beef it up with all kinds of machinery or hook it up to a robot to make it a cyborg. I want to be able to do that stuff more because it’s my favorite thing, but sometimes I’m just not inspired. I can’t just sit there all day and produce creative things. While I don’t know where those ideas come from, I can only do so much. One day I’ll draw a great still life or some really funny creature. Back in middle school and high school, I was really obsessed with drawing dragons. I’d draw a really awesome looking dragon, but later that day or the next, I’d try to do it again in a different style, and it would just look terrible and the perspective would be off. Sometimes it just works and sometimes it doesn’t.

AS: How do you personally define art?

JW: I guess a good definition of art would be applying yourself and investing yourself in some sort of endeavor, whether it’s hands-on or doing a really darn good job organizing your notes during class, I consider that art. If it looks good, and you put effort into it, and you can be proud of it, then I think that’s art.

If you are an artist interested in being featured next issue, please contact the interviewer at Annelise.Suber@principia.edu 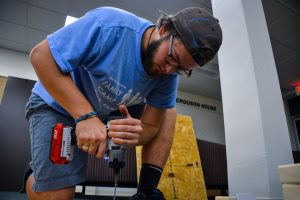