In November 2014, Principia’s Board of Trustees granted approval for the renovation of Voney Art Studio. However, since no apparent progress has been made, there have been many speculations about what happened to the funds.

One rumor is that funds were promised once the renovation approval took place, but, as the project developed, the funds were reallocated elsewhere. In actuality, the project is still running and is currently fundraising to begin renovation. It is slated for completion in two to three years.

Art department chair Duncan Martin has been a crucial voice in the effort to renovate Voney. He has been directly involved with the project over the past two years, working on various attempts to come up with a renovation plan that would work. He explained the project’s financing, the process of executing the project, and plans for the new building.

Martin cleared up speculations on financing. He said that, once the project goals and plans “were given the go-ahead, [the Board of Trustees] approved the raising of funds for the project, as opposed to the speculation that the money was already available for development.” Martin added, “In spite of the rumors circulating about amounts promised… we are encouraged [because] there are several donors who have expressed substantial interest in the Voney renovation project.This kind of development takes time.”

He was told that there is potentially two to three million dollars from donors who have expressed interest in this particular project, but who don’t yet have money available to donate. Peter Stevens, vice president for enrollment and external relations, clarified by stating, “We received donations that supported the initial design process. We haven’t  received donations toward the final design and construction, although several generous donors have expressed interest in the project.”

Martin explained further that the project development has “set an 18-month time frame for them to work it out. But during that time we will begin to refine the plan as more money comes in.” Stevens confirmed this time frame. He noted that, “If we receive the funds at a time when it’s sensible to begin design and construction, the transition will be fairly quick. For example, if fundraising came to a successful conclusion in September, we would begin the final design process immediately. This would give us enough time for Trustee review of the design as well as preparations needed in order to begin the project the following summer.”

There is an ideal budget that Martin said was given to the art department – about five million dollars. Martin confirmed that he and others working on the project have kept renovation plans close to the initial request of five million. Martin and his team had not envisioned tearing down Voney, but adding onto it.

The renovation committee faced a number of challenges in the planning process.  They felt that the main architect, John Guenther, who was initially involved in the renovation process, did not share their vision. Guenther and his team of architects designed the Science Center. The team worked through a series of ideas, but Martin said, “We were never satisfied; we didn’t feel as if we were working within the constraints that we felt needed to be met. In other words, we wanted it to be economical, and if we could, do it in the most sustainable, green way.”

Martin and his team tabled the project for a while and listened for the path they needed to take. They finally asked to work with another architect, Daniel Hellmuth, who has worked for Principia in the past. Martin confessed that the first meeting he had with Hellmuth was “wonderful” and “was like a meeting of the minds. [We] were on the same page…[on] many things.”

The team then went through several months of intensive planning. In the spring of 2014, they went through a process called “programming,” which means figuring out everything required for the actual renovation process. In the fall of 2014, they came up with a conceptual design. This design included what the building would look like, how it would fit in the budget, how much space there would be, and where the additions would go.

The team also had to work out how much construction would cost. The final cost that the team came up with was $5.4 million.

When Martin and the other faculty members involved eventually presented the idea to the Board of Trustees, they had layouts of what they wanted the new art studio to look like. The layouts included qualities that the new building would embody, such as inspiration. Martin explained that his hopes for the new building were to “support artists’ practice, or the making of art.”

Some of the renovations will include opening up the classrooms, which are currently too narrow and cramped. The hall containing the offices of the professors will be taken out; replacing the offices will be a glass wall and a hall that will lead to a lounge area for the students. The original room across from the offices will be expanded. The room facing the river will be taken out and replaced with a glass wall. There will also be a new balcony and a gallery. Martin and his team hope to keep the same feel of Voney, but to improve it. 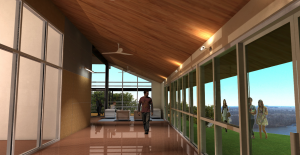 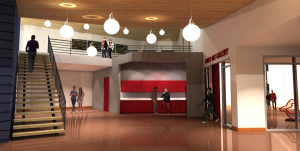 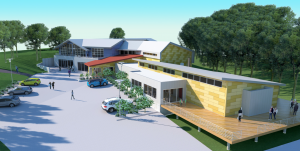 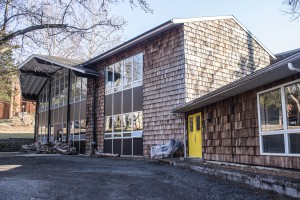