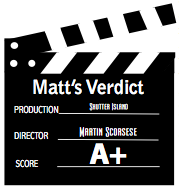 For the first time since The Departed, Martin Scorsese and Leonardo DiCaprio team up to dominate the silver screen. Shutter Island demonstrates Scorsese’s prowess in an unfamiliar genre – that of the psychological thriller. This film is guaranteed to distort your dreams for nights after you experience it.

Shutter Island takes place in 1954 during the McCarthy era of paranoia and suspicion.
A murderess escapes from the Shutter Island asylum for the criminally insane, and two US marshals are called in to help with the investigation of her disappearance. Upon their arrival, the island is locked down and the marshals are relieved of their firearms just before a hurricane devastates the asylum.

The casting and performance of every actor is exceptional. DiCaprio captures the essence and emotionality of a tormented federal marshal and World War II veteran. His character, Teddy Daniels, experienced the liberation of the Dachau death camp and is haunted by those memories. The viewer is subjected to these horrors as Teddy’s memory relapses during his investigation.

Sir Ben Kingsley plays Dr. Cawley, the head psychiatrist at the asylum. His character departs from the conventions of his field in a time when psychiatry was divided between brain operations and pharmacology. His benevolent attitude towards his felonious patients is often both kind and disquieting.

Don’t let the trailer fool you: this film is no cliché. The plot’s twists and turns will keep you engaged throughout its unfolding. What seems like a standard fare thriller soon becomes something far more disturbing and emotionally evocative. The film addresses themes of insanity, love, genocide, and cruelty to children. The story told here is not for the faint of heart.

Scorsese employs cinematography in conventional and unconventional ways. Alfred Hitchcock introduced many of the angles and shots present in this film, causing reviewers to call Shutter Island Scorsese’s homage to the famous director.

More important are Scorsese’s unconventional methods used to disturb and disrupt the viewer. Throughout the movie, he intentionally breaks continuity in various ways. During the span of a conversation, the lighting and coloration of the scene will change noticeably. All other filming conventions remain the same, which disorients viewers and keep them on edge.

In another scene, Teddy interrogates a patient who asks for a cup of water from his partner. When she takes a drink, there are three shots shown in a conventional manner. She grabs the glass. She is shown drinking. The glass is set on the table. Scorsese removes the glass from the second shot – leaving the viewer bewildered.

Shutter Island’s soundtrack is powerful, moving, and sinister. Every track is used to great effect in the film. The music will keep you in suspense, startle you, and move you to tears. The pairing of dramatic music with intense camera angles, as in the case of Teddy’s drive from the docks to the asylum, sets the precedent for the powerful use of music throughout the entire film.

Many critics fail to appreciate the narrative twist in Shutter Island. Already desensitized to the horrors depicted in the film and unable to invest themselves in characters they deem predictable, they miss the true purpose of the film. There is a deeply moral message engrained in the film that eludes these mainstream authorities.

The message is made lucid at the end of the film for one who has empathized with Teddy and suffered alongside him. This movie is more than capable of moving you to tears. Shutter Island deals with powerful themes in an intriguing and disturbing manner.

Congratulations to Martin Scorsese and Leonardo DiCaprio for another excellent film.
I will end on a note of caution: You may want to avoid or mentally prepare yourself for this film if you are easily disturbed or if a loved one has been touched by some form of insanity in your experience.