Is Ke$ha’s smash hit “TiK ToK” just of rip-off of other pop songs?

This week I wanted to address a topic that has recently been popping up on blogs and in my conversations with other music journalists. The other day someone was singing the chorus to “Tik Tok,” the breakthrough song from new party pop princess, Ke$ha. I cringed as I thought of the first time I heard it – I was in a friend’s room doing homework when I heard the eerie Gameboy synth that opens the song, with a bratty teenage girl imitating a hip-hop vocal delivery.

There was the shameless one-line co-sign from rap mogul P. Diddy (“Ay, what up girrrl?”) – a sure sign of the song’s desire to reach a broad audience through Diddy’s popularity. There was the AutoTune on Ke$ha’s vocals – a trendy accessory for the contemporary singer. A confusing lyric: “And now, the dudes are lining up cause they hear we got swagger / But we kick ‘em to the curb unless they look like Mick Jagger” (Dare I ask if Ke$ha has seen Mick lately?). The song sounded fun, sparky, and destructive-on-purpose with Ke$ha’s trenchant voice, sounding edgy since white girls don’t usually pull off the rap aesthetic well (save for Debbie Harry). All of these features made Ke$ha’s “Tik Tok” a surefire hit and the perfect fixture for a successful dance party.

I would’ve happily joined the Ke$ha party had it not been for one other thing that was hard to ignore (and this is the point of my article where I run the risk of sounding like a music snob): all the elements described above that made the song successful were a total rip-off of the French-based, electro-skank sensation, Uffie.

But who cares? Who the heck is Uffie, right? “Tik Tok” is a fun, upbeat song. Period. So what? I was thinking the same thing, until I heard another song by the G-rated electronic singer-songwriter Owl City. The song is called “Fireflies,” and like Ke$ha’s “Tik Tok,” if you’re into anything remotely Top 40, you’ve probably heard it recently on somebody’s iPod or computer. Again, “Fireflies” is another example of an infectious song, bursting with warm starburst melodies – yet, when referring to my Rolodex mind of pop genres, it massively fails with its flagrant similarities to another electronic pop band, The Postal Service.

At first I couldn’t decide why I was offended: perhaps this was merely a side-effect of my above-average consumption of music. I understand that this isn’t the first instance of bands sounding alike, or even identical. Dozens of bands ripped off the Beatles when they were still making music, and bands continue to do it today: this process is how pop genres are invented.

I kept digging for why Ke$ha and Owl City’s music bothered me. Was it merely their pop sensibilities that annoyed me? No, because both songs are insanely catchy and if I didn’t know what I know, I probably would have them on blast till 3 a.m. every night. Was it their declining record labels that are milking the heck out of any aesthetic that generates audience approval on the Internet (a recent example would be Rihanna’s music video for her song “Rude Boy,” which has many similarities to M.I.A.’s music video for her song “Boyz”)? Partly, but a dying industry that is attempting to take from the same medium that took and continues to take away sales from said industry through file sharing is ironically understandable. 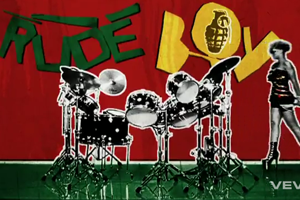 A scene from the music video for Rihanna’s “Rude Boy,” which closely resembles the video for M.I.A.’s song “Boyz.”

I came to the conclusion that this whole notion of copycatting in music is really a problem for the musically obsessed journalists, bloggers, and fans like me who can’t get around the fact that style is largely subjective – especially in music. In our post-modern viral culture, there is a fine line between subtly borrowing and blatantly imitating. It started with hip-hop in the early 80s, and has branched out into a messy assortment of subgenres that all share the common link of composing songs using samples of other records. This has made the role of a music critic all the more difficult, blurring the question of what aspects of a song to pay the most attention to – its level of originality, its cultural significance, its authenticity, or its ability to speak to the average listener’s inherent, personal concept of “good.”

Furthermore, this culture of appropriation has made the grounds for respecting a pop artist very ambiguous. While Ke$ha and Owl City may have scored points in the area of mass appeal, what makes them culturally significant is that their appeal is tied to their appropriation of fundamental elements from other artists, thus making them less original and authentic (which to the credit of both artists is hard to achieve when you are contracted to commercial record labels that feed what the consumer wants). Based on what I value in music, I do not respect artists like Ke$ha and Owl City. However, someone who is solely invested in what makes these artists appealing is free to respect them as if they were Nelson Mandela.

While I am disappointed that certain aesthetics developed by lesser known artists are being annexed for heavily advertised artists like Ke$ha and Owl City, it is wrong to be miffed by the latter two artists and their popularity. For me, this experience was a nice reminder about what makes entertainment culture great. What it all boils down to is that people value their own ability to like what they like for whatever reason. Even the snarkiest college music journalist can’t take that away from you. 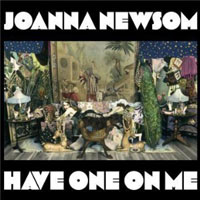 Northern California’s most famous indie harpist just released a two-hour, three-disc album called Have One On Me. “Go Long,” one of the many gems within the lyrical masterpiece, is a woeful ode to a lost lover, and represents Newsom’s quirky approach to classical composition. Channeling an intimacy akin to folk recluses Elliott Smith and Nick Drake, Newsom lightly weaves spiral staircase harp harmonies against her distinctly Lisa Simpson voice. This is a rare instance where skillful musicianship and crafty songwriting are equally impressive and alluring.

Are you upset that Jersey Shore is over? Get your dose of fresh trashiness with this gooftroop of Swedish synth-poppers that liken true love to backseat parking lot parties. Lines from MC Spank Rock like “my love is real, so I cop a feel” will blissfully bring you back to the good old days when Snookie was out on the dance floor doing cartwheels in high heels and a mini skirt.

Damon Albarn, aka Britain’s most outrageous pop chameleon, continues to rule the world with his experimental “cartoon band.” The first cut from the highly anticipated album, Plastic Beach, is a smattering of Albarn’s dexterity in composing spacious synth for Womack’s soulful and refreshingly AutoTune-free pipes, and Mos Def’s unstoppable, swagger-injected flow. The song serves as a snapshot of Albarn’s awesomely diverse collaborations on Plastic Beach with artists like Lou Reed, members of the Clash, Snoop Dogg, and The National Orchestra for Arabic Music.