Leonard Peters appeared to have shed some weight as he stepped on the well-manicured rugby pitch at the Emirates Airline Dubai Sevens rugby tournament that kicked off the 2009/2010 International Rugby Board Sevens World Series.

Peters, a former safety with the Chicago Bears, was turning out for the USA Eagles. Another convert was Lauren Shaughnessy, a former point guard for St. Mary’s College whose boyfriend, Kevin Swiryn, has captained the USA Eagles. The duo was among the 1,750 players in the three-day tournament last December, in which 161 teams from all over the world took part. 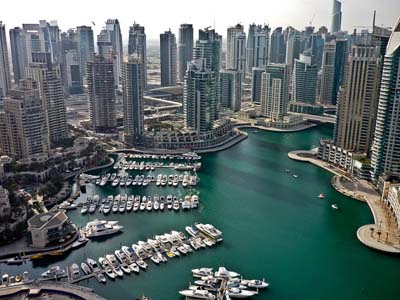 The Dubai Sevens tournament was first played in 1970, and Emirates Airline stepped in as a major sponsor in 1988. So when I was invited to join a group of international journalists to cover one of the oldest seven-a-side tournaments, the Pilot staff was as excited as I was. Covering a top-notch tournament in Dubai was an unforgettable experience.

Watching the top 16 teams in the successful 2009-2010 IRB Sevens World Series shed some light on why the shorter version of the 15s game was introduced as an Olympic sport last year.

The venue, appropriately named The Sevens, was finished in March 2009. Besides the main playing area, which can hold slightly more than 40,000 spectators, there are six other rugby pitches and facilities for other sports. What makes the Emirates Airline Dubai Sevens unique is not only how the organizers convinced one of the top airlines in the UEA to build the facility, but also the transformation that takes place a few weeks before the event. The spectator stands at the main pitch are temporary, and take nearly a month to build.

It is here that new players cut their teeth and the various coaches anxiously sit back to see whether they came up with players who can take the heat. Money is always on the core teams, which play in all eight tournaments of Sevens Rugby Grand Prix Circuit. These are USA, South Africa, New Zealand, Australia, Argentina, England, Samoa, Fiji, Wales, Scotland, Kenya and France.

Watching these fine athletes from 16 teams, some of whom can easily run 100 meters in just over nine seconds, hurtle on the pitch executing deft moves for 14 minutes in each game, makes rugby appear easy.

The players, who are divided into four pools of four teams, play three matches on the first day before proceeding to the knockout stages on the second day. Team USA, which finished 11th last season, got a big boost just before the tournament in Dubai when Emirates Airlines stepped in as the sponsor. They lost 12-40 to a well-drilled England before narrowly losing to Kenya and Russia.

It is at this point that the tournament becomes interesting with four competitions in one. The winners and runners-up proceed to the Main Cup while the bottom two teams land in the Bowl. USA met Portugal in the Bowl and won 5-0 but lost to Wales, the current Rugby World Cup Sevens champion, in the semis. New Zealand won the Emirates Airline Dubai Sevens by narrowly beating Samoa 24-12 in the main cup final. The Plate category – which is just a tier below the main Cup – was won by Australia while Wales took the Bowl and Russia the Shield.

Clockwork precision was the order of the day, with matches kicking off exactly when they were scheduled. The organizers kept control of a tight schedule so that larger television audiences could view the matches.

Away from the rugby pitch, Dubai, home of the world’s tallest tower, Burj Khalifa, is captivating for any visitor. Visitors might get the impression that this is a city under construction. At every corner, some structure is being put up with cheap labor from Asian countries. Well, not exactly. Dubai has some of the best facilities to compete with those that are offered anywhere in the world. The Dubai Desert Golf Classic and Tennis Championship attracts the best, among them Serena Williams and Tiger Woods.

For six days, I forgot about the chilly weather in Elsah and thoroughly enjoyed the warmth Dubai had to offer. I considered it a mini Pilot Abroad. How quickly time flew – before I knew it, I was boarding my flight for a 14-hour journey back to Prin.

The IRB Sevens World Series continues. As you read this, the teams will be packing up their bags for the next tournament in Wellington, New Zealand before swooping on Las Vegas on Feb. 13.