BMW returns to its roots of motorsports 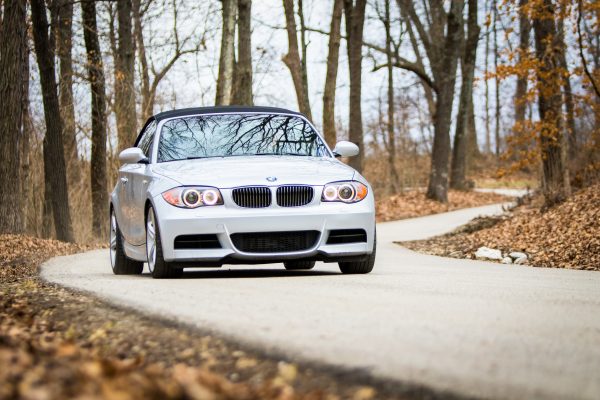 The 135i is like a great remake of a good movie: rare – at least in the used car market. It has some quirks and leaves you with the same feeling as the original BMW 2002.
The 2008 BMW 135i is a car for the enthusiast. During its release, BMW heavily pressed the idea of getting back to their motorsports roots. This was composed of a small platform and an inline six cylinder engine, though they also incorporated the addition of a twin-scroll turbocharger.
Many BMW zealots believe that turbos are voodoo and the Bavarian inline six should be left naturally aspirated. However, they probably have never driven the 135i.
BMW is good at transmissions. The 6-speed manual in the 135i is pleasurably smooth and easy to operate. The clutch is intuitive and doesn’t have any quirks as to where it engages. The shifter notches into each gear satisfyingly, and the M-sport shift knob, wrapped in perforated leather, has a great feel.
Another perk is that it’s fast. Sprinting to 60 mph in about 4.7 seconds, the gearing feels just about perfect for the available torque. A more than plentiful 2,000 RPM while running in any gear, the torque still shows its umph, even though the twin-turbo inline six is nearly devoid of turbo lag.
BMW also does well with their suspension packages. The 135i comes with a suspension tuned by BMW’s M-Division. This allows for wonderful cornering and direct steering. There is a hint of understeer, which is likely due to the staggered wheel setup – 7.5 inches wide front, 8.5 inches wide rear, and short wheelbase.
The 135i comes from the factory with run-flat tires. In order to get the most grip out of the car, these run-flats need replacements.
The steering wheel is one of the car’s best interior features.The wheel is a thick tri-spoke sport wheel wrapped in leather to match the shift knob. It is also appropriately weighted for steering.
The brakes are excellent, which is a necessity for a car that can run 0-60 in 4.7 seconds. The 135i has six-piston calipers in the front, which is more pistons than any M-car of the same year.
The disadvantages of the car are the iDrive system, rev limiter and rear visibility. The C pillars are so large that you might as well drive around with the convertible top half open. The iDrive system is unnecessarily complicated and seems dated. The engine software also feels rather restrictive. It does not let the engine rev as freely as possible limiting top speed to 155 miles per hour.
The 135i also lacks that sport car sound. The engine runs nice and smooth with a bit of a whiny whirr from the turbo, but the exhaust is much more tame.
However, with modified engine software and the removal of the rev and speed limiters, the 135i has incredible potential.
This car is willing to perform at a moment’s notice. It has a nimbleness that is not found in many rear-wheel-drive cars available. It is athletic and purposeful – a positive joy to drive.
The 135i is a love letter to past BMW’s. It is a modern take on some of the greatest vehicles BMW has created and is exactly what gives BMW the reputation as a company of reliability that created the “Ultimate Driving Machine.”
Overall, the 135i is an exquisite and lithe enthusiast’s car that is as likely as any of its time to become a classic.