Ever wondered where the majority of people stand when it comes to a food duel on campus? Well, you’re in luck. It just so happens that a survey was taken recently on campus to determine preferences between a few common food competitors.

In this survey, the battles were between Coca-Cola and Pepsi, mayonnaise and Miracle Whip, and Five Guys and In-N-Out. The surveyor was asked to include Chipotle and Qdoba later in the study, so though the sample size was smaller, the additional survey was created.

In the food duel, people were asked what they would prefer out of the two contenders and were also given the option of neither or both. The sample included 170 people on campus. The majority were students but College President Jonathan Palmer, Associate Dean of Academics Joe Ritter, freshman housing director Joshua Sprague and several resident counselors were asked for their input.

Here are the results: 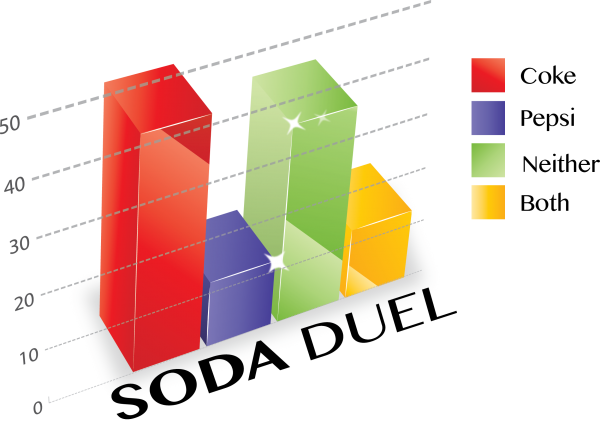 Coke beat Pepsi by 30 percent. “Who drinks Pepsi?” asked junior Brandon O’Neil. Senior Casey Lee chose Pepsi, saying “because I’m an American.” Coca-Cola is the most well-known brand in the world, so they had a leg up on Pepsi.

Pepsi won only 12 percent of the sample, but a surprisingly large amount of people chose “neither” because they just don’t drink soda. “It’s bad for you,” Buck resident counselor Jonathan Daugherty said. 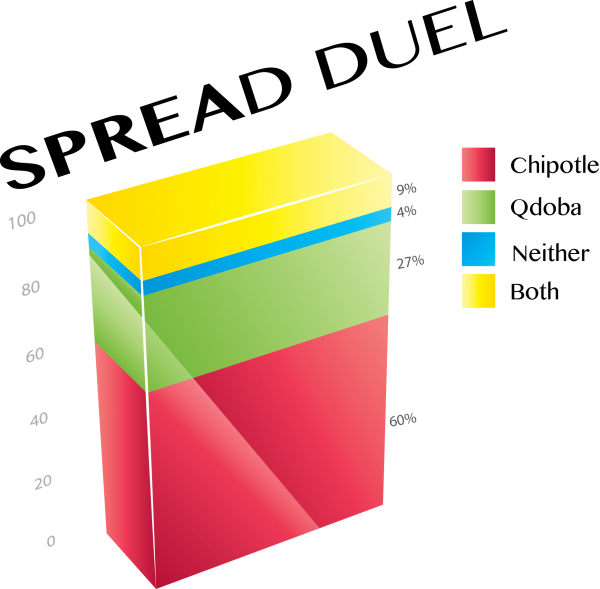 While mayonnaise and Miracle Whip can be used for more than just a spread, they were categorized as that for simplification. As shown in the results, Miracle Whip is not a crowd pleaser. Several people confused it with its sweeter cousin, Cool Whip, before being notified of the difference.

What were students’ thoughts on the two? “Defs not Miracle Whip, bleh,” junior Melissa L’Heureux said. On the other hand, sophomore Sage Stafford believes Miracle Whip was better, saying, “It has the perfect texture, and mayonnaise is creepy.”

Full disclosure: while the surveyor is a proud employee of Five Guys, she tried very hard to not let that fact affect the questioning process. This duel came out very close in the end with only an 11 percent difference between Five Guys over In-N-Out.

Students had solid favorites, but also deep hate for the opposite side. When asked about his favorite, junior Toby Raine said, “In-N-Out is garbage.” Euphrates Institute postgraduate intern Oliver Simpson called it rubbish, and junior Lisa Lewis said it was trash. Other students said In-N-Out is overrated and that the Californians need to calm down. One native Californian was even worried to say she liked both in fear that other Californians would find out.

Comparatively, Five Guys lovers said they love the freshness of the ingredients, and that the burger is just a great burger. There’s no need for some secret sauce or grilled mustard, the burger itself is superior. Also, that extra scoop of freshly cut fries just makes Five Guys that much better.

On the other side, In-N-Out lovers – commonly Californians who grew up with the chain – were strong loyalists. Freshman Claire Douglas, a Californian, said, “There’s nothing wrong with Five Guys, In-N-Out is just better.” “The sauce is boss,” junior Jake Elmore. In-N-Out also has shakes, something Five Guys is still experimenting with.

Five Guys did not strike the best chord with some students. Junior Corey Fedde knew very well what he liked and what he hated, the latter being Five Guys. In-N-Out is known for their devoted customers, and everyone has a right to their own opinion.

Lastly, several others said the two chains were too different to compare; you go to them for different reasons. Some said In-N-Out is fast and inexpensive, while Five Guys has a great atmosphere with great food.

This was an overwhelming defeat for Qdoba, as Chipotle took more than half of the sample at 60 percent. Several Qdoba favorers only chose Qdoba because it has queso sauce, but if Chipotle started to offer that, that they would switch in a heartbeat.

Chipotle is a burrito chain owned by McDonald’s, and Qdoba is one owned by Jack in the Box. Both have similar “you choose” serving lines and are priced similarly. Those who favored Chipotle said that they’re a responsible company with better, wholesome ingredients. Those who favored Qdoba love the queso sauce, but also liked it because of the wide arrange of options.

Hopefully this survey can settle debates around campus on preferred sodas and restaurants. But just because it’s preferred at Principia does not mean it is worse, or wrong, just not favored by the 170 people surveyed.

Although it’s great to be a loyalist, for those who haven’t tried the competitor of your favorite food, don’t be afraid to step out and do so. You might find something better, or just strengthen the loyalty you already have to your favorite.