Recently visitors to the Merrick Wing of Davis have received something new to look at: a troupe of peculiar little people, along with all their tiny accessories, has taken up residence in the glass cases near the front door. Immediately drawing the attention of whoever should walk past their glances, they are part of a new display highlighting a larger assortment of puppets cared for by the Principia Collections.

The Principia Collections has an impressive variety of the antique, the exotic, the rare, and exceptional. A look around the collections room can turn up any number of unusual items. Perhaps one of the more unusual collections in Prin’s possession is its array of puppets from around the world—Chinese, Indonesian, Italian, English, American. The diversity of such a specialized collection caught the interest of Jayne Stanley, collections manager, who began installing the display in Merrick Wing highlighting the Principia Puppets. Hours were spent researching, documenting, and displaying the collection, the first major change in the Merrick cases in several years.

Each puppet tells a story, both the stories they were intended to enact and the story of their origin. “Among European puppets,” Jayne writes in her lobby display, “marionettes [puppets controlled by strings] are considered the most delicate and difficult to master.” Some are so lifelike to imitate every action of humans and animals. Among those on display is a knight in shining armor made in Italy, his sword ready for the draw. The Punch and Judy pair, a special favorite among British children and this journalist, sit peacefully behind the glass, enjoying a break from the usual violent entertainment with which they are associated. Shadow puppets from China and Indonesia stand ready for the lights to go up and their performance to begin.

The “whole world” aspect of puppetry is celebrated in the diversity of items on display, thereby also highlighting the universality of drama. The Chinese and Indonesian puppets, for example, were used by practitioners to preserve the religious and communal folklore, telling stories of gods, prophets, and heroes. Like Principia students, the puppets represent simultaneously the distinct beauties of cultural diversity, while celebrating shared values, artistry, and humanity.

Perhaps the most artistic among the collection of the marionettes is the complete set of hand-made Coffer-Miller Pedal Marionettes used for productions of “The Imaginary Invalid” by Moliere and “The Rivals” by Sheridan. Pedal marionettes get their name from the intricate mechanism, resembling the pedals of an organ “played” with your fingers, used to move them realistically across the stage.  Part of Collections since 1978, these puppets originated with touring performances Jess Coffer and Martha (Miller) Coffer, both seasoned Shakespearean actors. Upon retirement from the stage around 1943, the couple began designing and constructing their own complete cast of tiny actors, made from recycled cloth and accessories from their Shakespearean performances. Newspaper accounts of these puppet performance describe the company touring all over the Midwest, giving popular and well-attended shows.

Puppetry’s connection to drama is appreciated by many who pass their display cases. Chrissy Steele, professor of Drama, passes by the puppets every day with her cup of tea and yoga mat. When asked about her feelings of the marionettes, she made a connection to the performance aspect of the puppet shows and the performances going on in Davis. “It’s a different aspect of theatre,” she told me, “something interesting, something fresh.” Puppetry’s place as a dramatic art is highlighted in the intricate design of the “actors,” the grace of their movements, and the festivity of their costumes.

Every item tells a story, and the Principia Archives and the Principia Collections aim at telling that story, putting it into appropriate context so we can better understand and connect to the world around us. Those items we call “oddities” are valuable because they call our attention to what is unfamiliar to us. They provide us opportunities for freshness and growth. A puppetry collection might be an “odd” display to view at first, but take a look at the expertly composed descriptions beside the items and one begins to see artistry, drama, culture, and humanity in a fresh and colorful way. 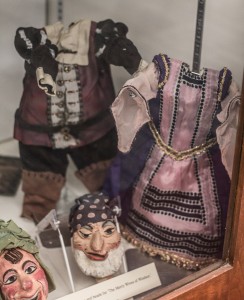 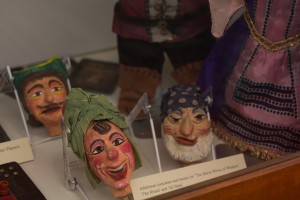 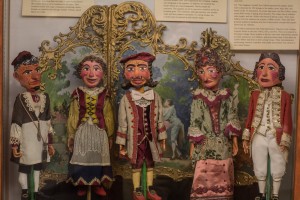